I don’t check Craigslist often because any time I do, My Love gets sent 10+ pictures of sewing machines I think I need (like cannot live without) in that moment. Most of the time they are machines or things that are priced way too high so I know it will not happen and should not happen. I have many wants but he normally gets the dramatic messages of me needing something in order to take my next breath–poor guy. Self-control was never my strongest trait. I’m practicing… sort of.
Today was different. While waiting to clock in at work, I was reading about so many fun finds people had come across at thrift stores and places online. I couldn’t contain myself any longer. (I told you self-control was not my strongest trait.) I jumped on Craigslist and typed in my town then searched for “quilt”.
A few items down there was a listing for quilt tops at a great price but the main picture was not something I was interested in. Thankfully it said quilt TOPS (plural) so I clicked– sneaky, sneaky. A lady was selling all of her mom’s finished quilt tops and obviously had no idea what she was holding. First, I sent a message to My Love to figure out how to even contact a seller on craigslist. Then, I sent a quick text to the seller and surprisingly I received a prompt answer. All the quilts were still available.

I’m not normally the one to find the fun deals; I’m the one who reads about all of it after the fact.
A time was set to meet at a popular gas station in town and, although there were three quilt tops I was definitely interested in, I asked if she could bring all the tops that were available.

Here is what I walked away with. 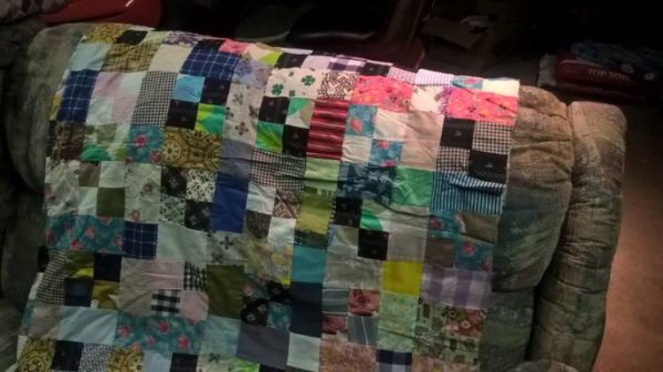 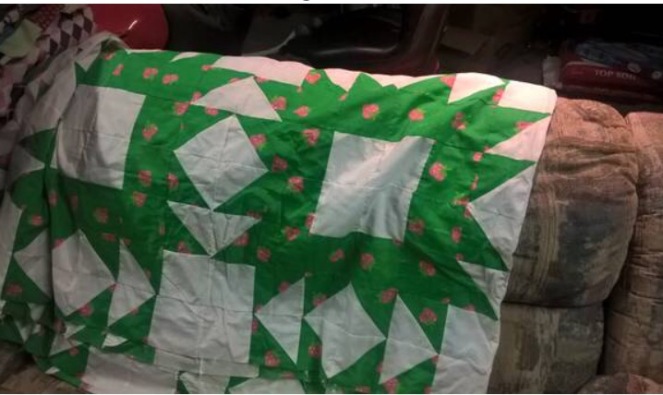 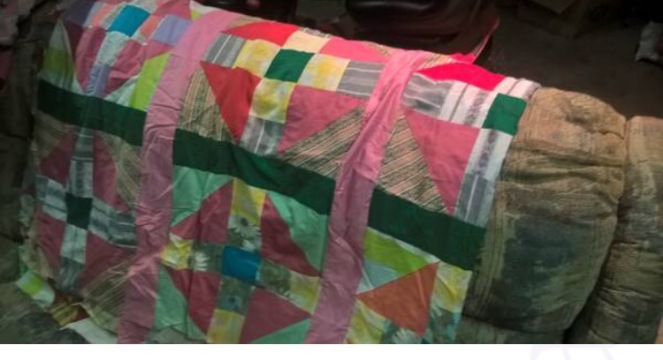 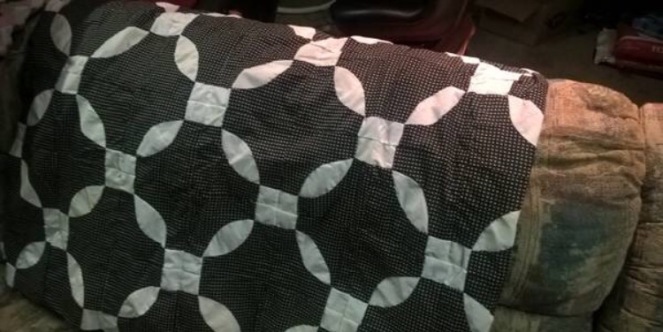 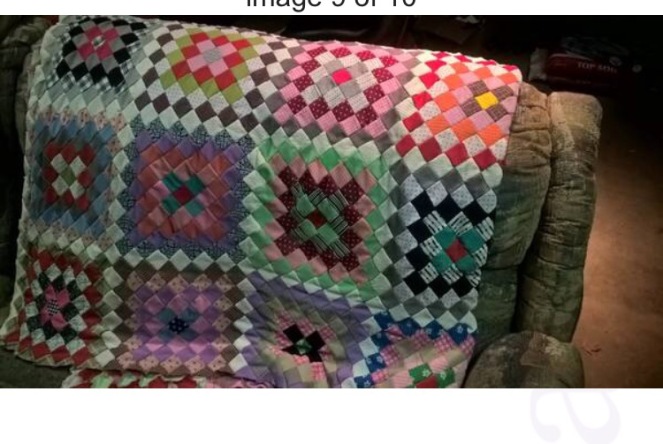 Her loss is my gain. Stick around to see what happens with these quilt tops. I have so many ideas running through my head and I cannot wait to share them with you.
See you at the machine,

Have you ever inherited a project– a pile of half-sewn-together, half-cut, random-pieced project without direction or instructions?
A few months ago I received a box of inherited projects. I could not be happier. Some of the projects were full kits that have never been touched, some were half finished, and others seemed to be pieces left over from finished projects. I think fabric could be my love language so this was like love in a box. 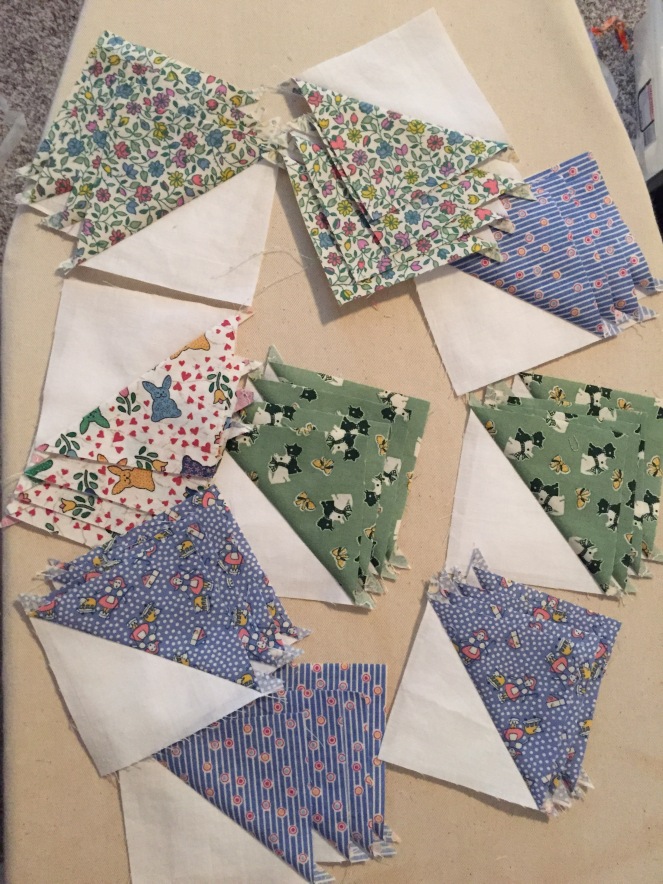 After working on my Christmas Quilt for the better part of the weekend I decided to look at one of the inherited projects I had uncovered.
This particular project was pinwheels. (You could have guessed that, right?) I do love a good pinwheel quilt. A few of the blocks were sewn together, two blocks were spinning a different way and were larger than the rest, and then there were blocks not yet sewn together. I started by sewing the rest of the pinwheel blocks together, and I made the decision to remove the two larger, wrong-way pinwheels. This left me with 18 finished 6” pinwheel blocks– definitely not enough for a quilt. 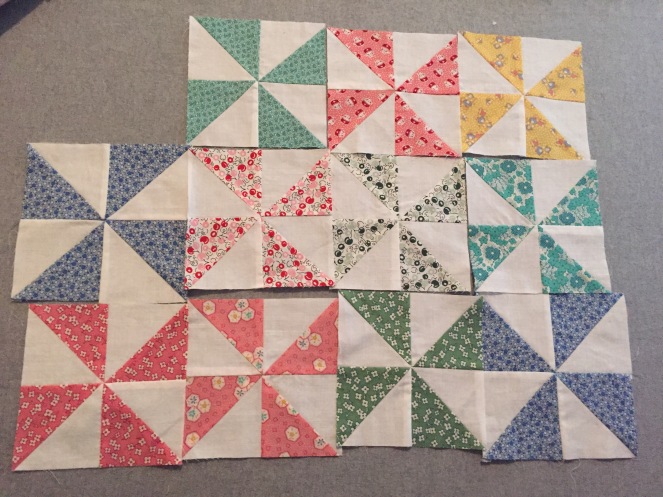 Since I didn’t have any of the background fabric I was kind of stuck with the amount of pinwheels already made. I love reproduction fabric, so of course I had quite the collection in my stash. I decide to checkerboard the pinwheels with solid squares. A simple, yet playful quilt emerged and Playtime in the Past was created. 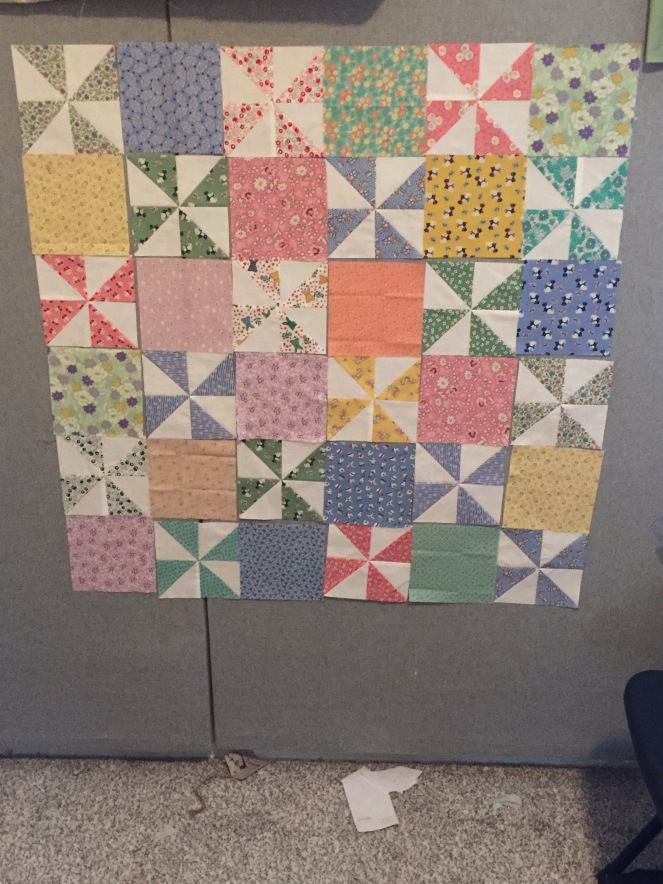 As I sewed, it was quite fun thinking of what these blocks were intended for and what other quilt they were included in if these were just leftover blocks. My imagination definitely ran wild.
What projects have you inherited? Were you able to work through them to completion? 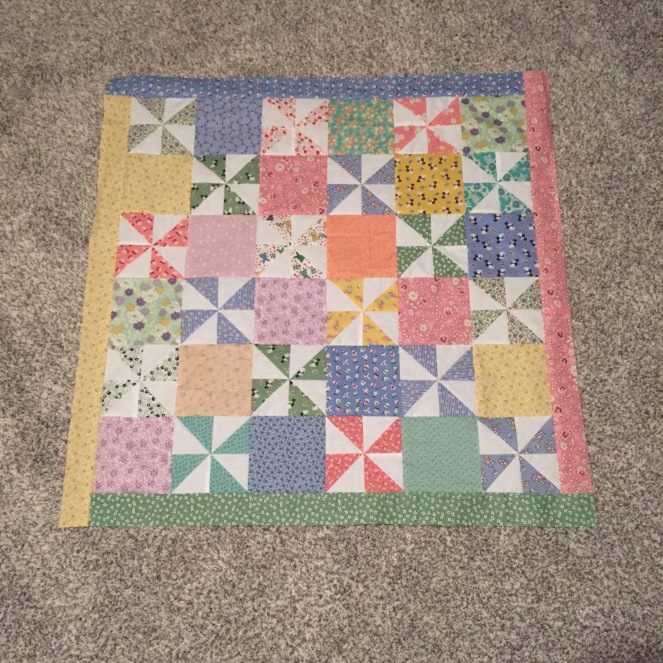 See you at the machine,